I had a dream that the bear cub was an identical twin and that since her birth I had been completely neglecting her to only give attention to nerdlet and the bear cub until the twin had starved to death. I think that it probably means that I'm really worried about having enough time and energy to mother a third baby. I know that I'll be able to do it and that people have 3 babies (either triplets or singles) all the time and do just fine, but my subconscious obviously feels differently.

I've been putting the bear cub down more and trying not to give both girls as much attention all day so that they won't feel as deprived and blame the baby. The girls were really resistant at first. The bear cub would complain and try to get me to pick her up all day, signing please (for please pick me up) constantly. Now, less than a week later, she squirms to be put down so she can play and explore after very little hold time. I also found her and the nerdlet happily playing together in the dog water dish earlier. Also, the bear cub has gotten very good at holding her own bottle and feeding herself while not in someone's arms. She still wants to fall asleep with a bottle in her mouth which I've been trying to discourage, but a lot of times it means she is not going to sleep for an hour or longer after I want her to.

The nerdlet is having a harder time with the changes. She says, "I'm mad" and "I cry now" an awful lot lately. She is mad that I don't carry her up and down the stairs anymore. She is mad if I only have the single stroller and I won't take the bear cub out so that she can ride. She is mad if I try to double the girls up to bathe at the same time, esp if the bath gets cut short. It's actually nice that she is telling us that she is mad and although the fits are not in any fewer supply, they do seem to have lessened in intensity. She has been trying to be babied more though in the last week or so by constantly trying to sit in the baby car seat or asking to be put in the playpen. She has also been more affectionate which I don't feel to be a bad thing.

We were so worried about how badly the nerdlet was going to take having a new sister and she completely surprised us by loving her from the moment she met her. I have a feeling Darth Baby isn't going to be as well received by either the nerdlet or the bear cub, but hopefully we'll be pleasantly surprised again.
Posted by Kimberly at 8:46 AM No comments: 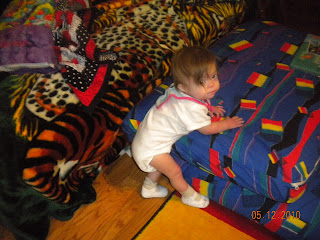 P and I learned that we are going to add another addition to the family (in December). This was quite a surprise as we had thought we couldn't get pregnant without medical intervention. I had already gotten rid of all my pregnancy clothes and the infant clothing was packed and ready for the next donation pick up. Even the way we found out was a big surprise. I had gone in to the OB/Gyn about some issues which we thought was probably a cyst. It turned out the cyst had a heartbeat. We were planning to have more eventually through adoption but are quickly adjusting to the idea of having three babies at the same time. Hopefully the girls will quickly adjust when the baby arrives.

I called the nerdlet Attila before she was born. The bear cub had the nickname Genghis. P suggested Darth Baby for this one and I rather like it. With my first two, I started throwing up as soon as they attached to my womb and continued to make me puke through to the birth. I also had Carpal's Tunnel and gestational diabetes. Darth Baby, however, has caused relatively few symptoms and I'm trying to enjoy the lack of issues instead of thinking that it is because something is wrong.


P and I have decided to pass on all testing (other than ultrasounds) on the baby. I think it will make for a less stressful pregnancy with me and it would make no difference on the outcome. I would feel stress leading up to each test and if any of them came out positive, I believe that would also add to my stress level. This baby is a welcome addition regardless, though I know most of P's and my family is hoping for a boy this time.

On an added note, I can only imagine the comments I'm going to get when carting the 3 babies around. I think if anyone asks me what I was thinking, I am going to respond, "What was I thinking? I was thinking 'Oh, that feels good. Do that some more.'"
Posted by Kimberly at 10:31 AM 3 comments: