So on the nerdlet's peacock dress post, Mother of Reinvention asked me if I had made any adult Ottobre patterns.  I have only made panties but I have traced a number of patterns off and decided to make one of them up.  This is a combination of Ottobre 2-2007-3 and 2-2007-5, which are both tshirts with slight variations. 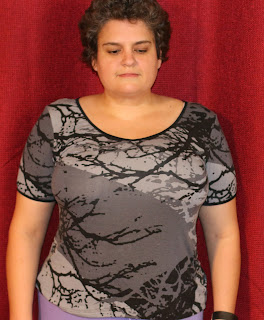 I hadn't intended to trace off different sections and didn't realize that I had until I had finished the t-shirt up.  This was made in a size 46.  I chose it on the basis of most of my measurements and made no adjustments, but my chest measurement is a size bigger than the pattern.  I figured that the since it was a knit t-shirt it would be fine, but I think I might be more comfortable in a 48.

The fabric was sent to me by my cousin and it is incredibly soft.  It's actually been through the wash a number of times before the t-shirt was made because my girls are constantly playing with it and at one point the nerdlet even cut a big hole in the middle of it.  It was going to be my first maxi but because of the hole the plans for it changed and a number of smaller things are being and have been made from it.  There is another dress from the pattern that I used for the peacock dress coming up, but one of the bodice pieces has disappeared.

I'm pretty pleased with how it turned out and I intend to make a number of other items for myself, though I may trace off larger sizes than the ones that I have waiting.

The next three shirts I made for Q. 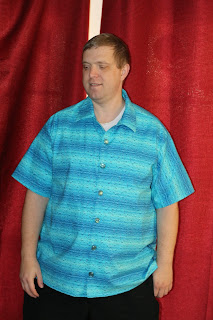 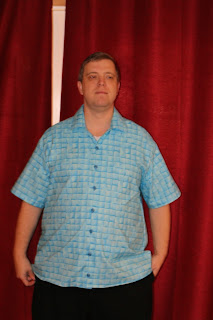 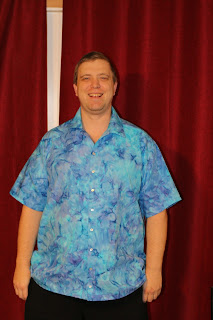 I have quite a few more to come, but I won't be working on them for a while.
Posted by Kimberly at 3:37 PM No comments:

My nerdlet loves birds, especially flamingos and peacocks.  When I saw this fabric, I knew she would love it.  I had just received the newest edition of Ottobre, which had this dress.  The picture is not that good because the nerdlet was not exactly being cooperative.  I barely got her to take off her jacket and she wouldn't let me straighten the dress on her shoulders. 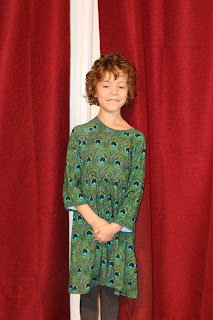 I finished the neckline and sleeves with fold over elastic.  She really likes the style and has asked for more.  I think she is outgrowing her desire for frilly over-the-top girly dresses and is looking for more comfortable and simple dresses.

The best sweaters for my bear cub are a design for infants and toddlers from Ottober Magazine 6/2011.    The reason that I think it is the best is because it is lined and none of the seams touch the body.

It goes up to size 86 which is a size 2T.  I was planning to use the 86 and blow it up to the bear cub's current size, but I couldn't find either the magazine or the pattern sheet.  So I had to improvise.  I used a boys's sweatshirt with raglan sleeves that started at size 98 from Ottober 4/2010 for the length of the shirt and sleeves and estimated the size and shape of the pieces.

Here is Darth Monkey modeling the sweater.  Please ignore the dishes behind her that need to put away and may or may not have needed to be put away for quite some time. 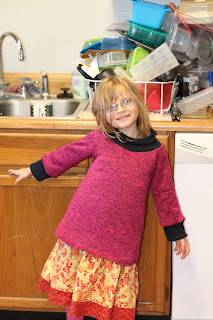 My MIL bought the pink sweater fabric at Hancock's last week and she also bought it in purple and green so I will be making more assuming that this fits the bear cub well.  Based on the fit on Darth Monkey, I imagine that I might have to shorted all the pieces, but either way the bear cub will be wearing this one tomorrow since it is supposed to be close to freezing tomorrow and for us this means very cold.
Posted by Kimberly at 11:53 AM 4 comments:

There are going to be a few more men's shirts before I get to other clothing. 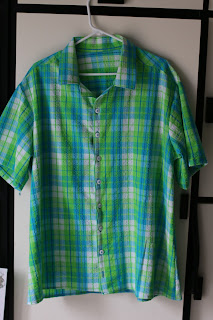 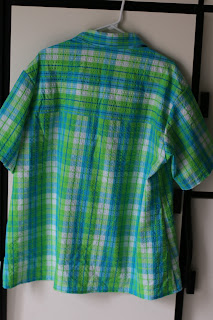 I posted a while back about an awful experience that I had at Jo-Anns.  The shirt that I finished today was the fabric that I bought at that time.  I'm decent at improvising (and by decent, I mean that I start by panicking and throwing a small internal fit unable to think that I will be able to fix it and that it is completely ruined until I eventually get back on track) and so I pieced the back so that it look intentional.  I'm lucking that the pieced line looks about the same point that men's shirts often put the same line because in this case I didn't have much of a choice.

Q came home yesterday telling me that he got lots of compliments on his peacock shirt.  I think he's excited about this shirt and the upcoming ones because last night, he kept saying things like, "It's okay with me if you would rather sew tonight."
Posted by Kimberly at 12:14 PM 4 comments:

Before I show you Q's newest shirt, I need to preface it with the story.  I had a number of fabrics picked out and in my online cart, some of them for Q's shirts and some of them for dresses for the girls.  I showed them to Q so that I could get the okay before I checked out so that I could be sure he would wear them before I purchased them and put all the work into the shirts.  This fabric was actually one that I had picked out for a dress for the nerdlet, but this was the one of the group that got the most approval from him, so I changed the fabric amount and purchased it.

I  actually thought that maybe I would still make a dress or two out of it, but after finishing the orange shirt I posted, this is the one that he wanted me to make next.  I'm posting it now although it still needs buttons because my sister asked to see it.  I had buttons picked out for it, but they have disappeared.  I should pick new ones later today.

I actually love it.  It is beautiful fabric and the size of the shirt is perfect to show the fabric off.  I also love that Q has the ego to pull off wearing a shirt like this, and really who else than my opinion matters, right?  Right? 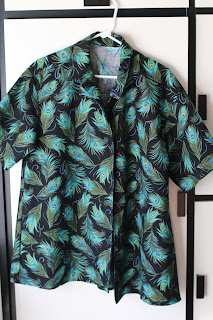 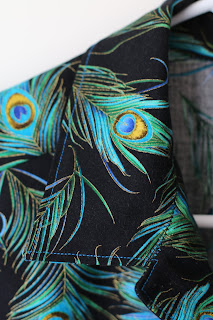 Photo of my beautiful girls 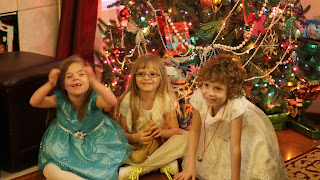 Two weeks of the new year has passed and I've just finished my first project.  I actually did quite a bit of unblogged sewing in 2015, but I'm hoping to do better about posting my work this year.  I often use it for information on what changes I made to a pattern or thoughts about future changes, and sometimes re-reading a post about a pattern reminds me of something helpful when I make it again.

I'm making Q more shirts using McCall's 2149.  I had planned to use this as a shirt block to make a lot of different styles of shirts for him, but he expressed a desire to continue using this style and since I now have it down, it's fine with me.  I have a number of them with the fabric cut out, where I need to cut out the interfacing and make sure I have buttons and the like.

Here is the newest one.  Darth Monkey loves it. 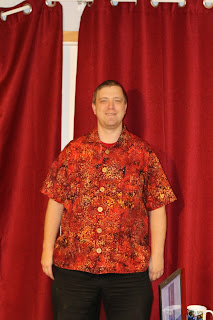 I actually bought a bunch of fabric and patterns during the MLK sale at Hancock's going on through Monday.  I probably shouldn't buy any for a while.  I am excited about some Scuba Knit that they had.  They only had ugly colors and patterns, but I bought some of every one that I found so I can play with it.  At $1.50 a yard I couldn't pass it up even if these were the very last colors I would choose.  I'm looking forward to playing with it, but I have quite a number of projects that are on my list first.

Here's hoping to a better year of blogging here.
Posted by Kimberly at 8:20 AM 2 comments: