8 oz cream cheese, cottage cheese, or ricotta (I used cream cheese because I had it on hand)

1 jar Tomato Basil Sauce (Classico or I make my own)

Boil chicken and cut into bite size pieces.  Place chicken and spinach into large frying pan and cook on medium heat until spinach is just wilted.  Add cream cheese until melted and garlic and either parmesan or pecorino romano to taste (I used 1Tbsp and 4 oz mixed).  Add jar of poblano sauce and stir until well mixed.

Posted by Kimberly at 3:36 PM No comments:

Mexican Rice with Quinoa in the Instant Pot

So I'm only half Mexican so if you don't feel this rice is authentic, you can call it half-Mexican Rice.  I've had a hard time making my engineer happy with my rice at home and this one made her really happy so I'm recording what I did so I can repeat it since normally, I just throw it together.

Saute in the pot until soft.

Add 1 Tbsp garlic and turn off the heat.  Stir for a minute or so.

Add 2 cups of long grain white rice and stir for a few minutes (while the pot is still hot).

1 14 oz can of diced tomatoes with liquid

Posted by Kimberly at 2:26 PM No comments:

Neither my husband nor I are much into plaid, but for some reason the nerdlet completely loves it.  I bought 3 different plaid knits from califabrics.com this week and they sent it out right away.  Two of them were double brushed knit but the 3rd was a cotton jersey knit without near the softness or stretch.  The nerdlet wasn't sure of those and I decided to use that one first so that I didn't decide not to use it at all.  I am not even sure if my reasoning made sense. This is the fabric.  I actually bought the last of their inventory. 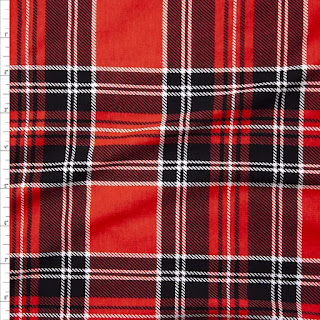 I used the pattern Ottobre 1/2021 - 30 in size 140 that I used for her school uniform pants last year.  She wears those pants all the time, for school and home.  I turned the pattern into long shorts.  I actually aligned the pants where I thought the straight of her leg would lie and it was a mistake.  The next pair, which I will post after I get a picture of her in, I aligned the horizontal along the bottom of the leg so the hem was straight around.  Here is the pair I finished before she went to bed.  She says they are super comfortable and loves them, but because they are tight like leggings, I made the next pair an inch wider, which I think still might be too snug for acceptable school clothes, but I will see when she tries them on tomorrow.  I also ended up cutting off half of her uniform pants into capris like these since she doesn't have to wear a uniform for high school (I don't think anyway). 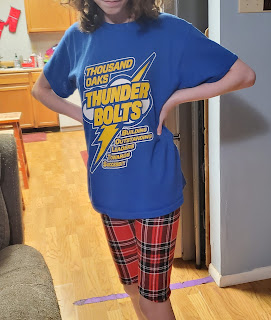 I am considering making her a raglan top with the sleeves with the same plaid, but matching is really not the nerdlet's style so if she wears such a top, it is highly unlikely she would wear it with these capris.

The next pair which I just finished is from this double brushed knit.  I actually bought 2 yards of this and so I have a fair bit left over.  I'm thinking of making a super simple shirred dress for the grandbaby with what I have left over, but I haven't decided yet. 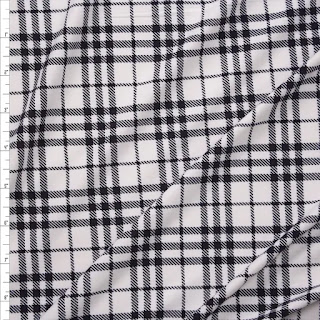 This is the last fabric I bought in this batch, and I'm waiting to see how the extra inch fits the nerdlet before I cut out another pair.  But she will be getting capris out of this also.  If she would wear a skort, I'd make a skort from it and I might anyway since the bear cub can wear the same size, even though she is much shorter, but I haven't quite decided yet. 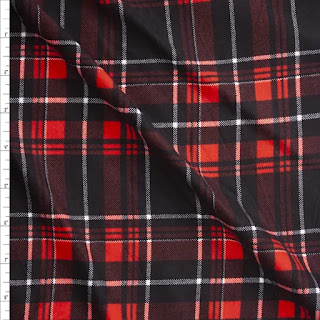 I went ahead and made one for my engineer, too.  She is shaped very differently from the nerdlet but this is the same pattern, but not finished with the elastic on the bottom (which if I added at the nerdlet's size would not possible fit the engineer.  You can see by the wrinkles on the front that it is too small there, but she says it is much more comfortable like this than any of her others.  I also like that though I did not intend it, when I added the straps that I made it good for boatneck tops.  I will have to draft a different one with the straps close to the neck. 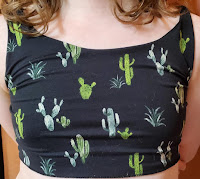 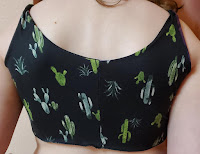 As an added note, I got permission from the engineer to post these.

Posted by Kimberly at 7:01 PM No comments:

This is a bra I made for my nerdlet last year.  It's actually the smallest size of a Jalie shelf bra lining pattern.  It is Kate's favorite and she wears it pretty much non stop so I am overdue for making her another one. 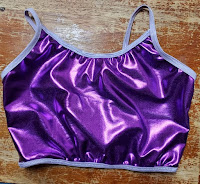 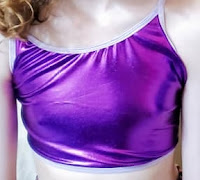 I started her two more yesterday while Q took the girls to his mom's for a visit, but she said they were too tight so I had to start over.  As long as I was tracing another size, I changed the pattern completely.  Here is the original. 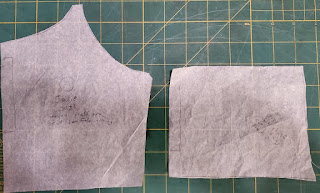 And here are the changes I made.  I actually have them folded in half here as I find it is much easier on projects like this to not cut on the fold, but as a single flat piece. 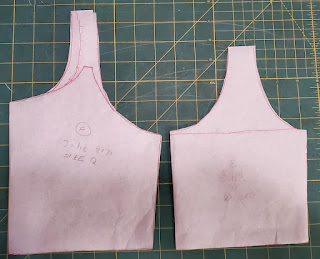 And here is her finished bra.  Q took the girls to the movies so I don't actually know for sure that it will fit her, but if it doesn't, I will try it out on the bear cub and the engineer.  I made it from the leftover double brushed knit fabric from where I made pants in this post, so it is super soft.  If it does fit I'll be using the other left over fabric from the other pair of pants in that post. 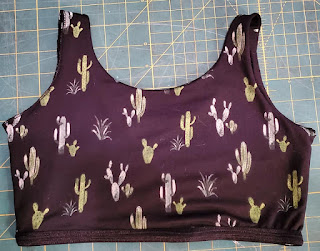 So my favorite dress is a version of Simplicity 3503.  It was a pattern that was very popular when it was released in 2009.  I don't know when I made my first one.  I looked through my blog here and my pictures on facebook and I could only find a few pictures of me in it from one of my daughter's birthday parties, and they don't exactly show off the whole dress. 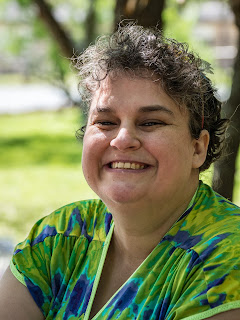 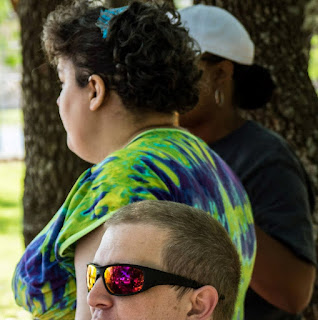 Here is a picture of the whole dress that I took last night.

Ever since I have made the first one, I have intended to make more, but somehow I have always put it off for other projects.  For Mother's Day, my husband has been trying to give me as much time this weekend to sew as possible for a semi sewcation.  So I made another one.  I actually lost the instruction sheets for the pattern so this was likely made slightly differently.  I'm actually super happy about this one.

I am rather fond of polka dots though I very rarely wear them or make anything with them, but these I think are very nice. 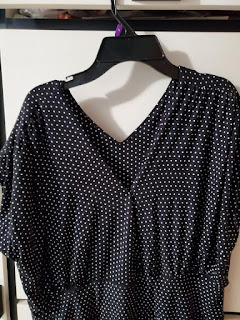 I have 3 more cut out.  Here are the waistbands for them so you can see the fabrics.  I'll probably make the middle next simply because I have black thread in the sewing machine and serger. 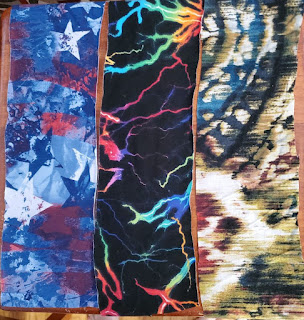 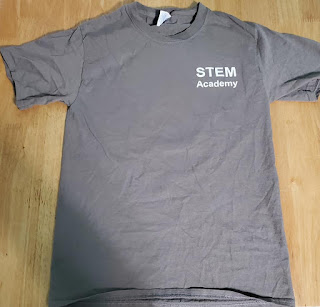 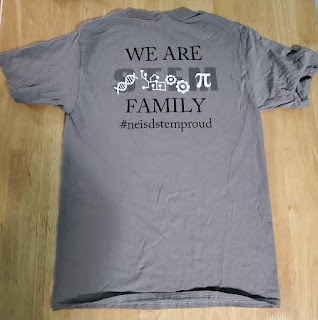 Well, if you are me, you turn it into a dress for her.  I used a ready to wear dress as a pattern, but the fabric on the original dress has more stretch and so while this dress fits her, it is definitely more snug than I had intended, and I should have made her straighten the right sleeve before I took the picture but I cut them the same.vvShe loves it though. 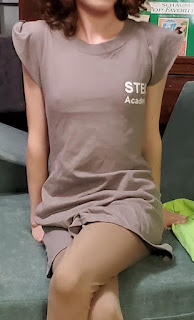 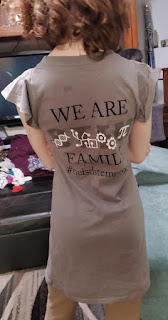 This is the dress that I used as a template.  It is a size 12 kids from Zulilly. 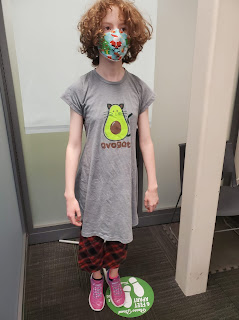 Posted by Kimberly at 7:44 PM No comments: