I had my first 3rd trimester (29 weeks) appointment this week. Darth Baby is measuring at just over 3 pounds. Her kidneys are still mildly dilated, but everything else is still looking good. The technician said that she was too developed to see the three lines to show that she was a girl, but that she most definitely was.

I had a particularly good hand day recently (gestational Carpal Tunnel sucks) and decided to give the bear cub a hair cut.

Here are some before pictures: 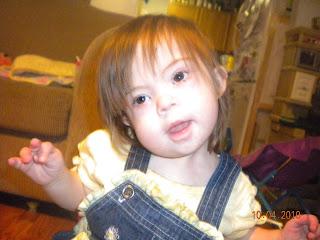 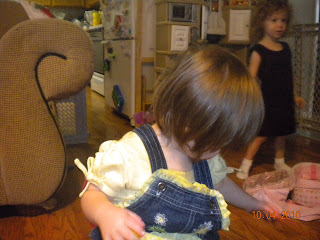 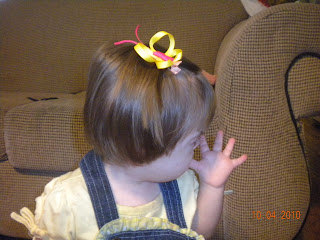 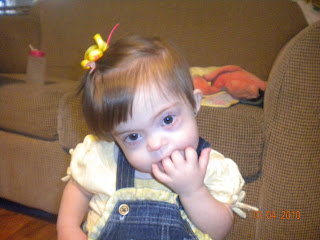 It's not perfect, but I think it is an improvement, and Q's comment was that it enhanced her cuteness.

A picture of the nerdlet in yet another costume: 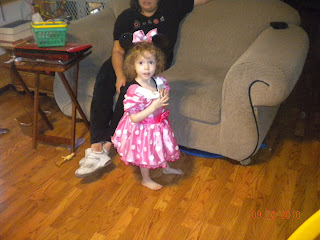 And Misty comfortable in the bear cub's chair: 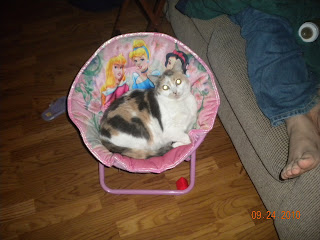 Posted by Kimberly at 3:32 PM No comments:

Confessions of a Mama of a girl with OCD

My nerdlet has a few OCD tendencies. I think every toddler/preschooler has some, but my oldest has quite a few and some weird ones. For example, she won't go #2 and #1 in the same potty. She'll make you clean her potty before she goes again or she will sneak upstairs to use the other potty to finish. She did this even in diapers some and often would do the second function as soon as you changed her.

I've been told on a number of occasions by different professionals (therapists, doctors, teachers, etc.) to curb these because allowing them this young would only make them worse later on. I mostly try to do so. Some, like the potty issue, I don't know how to as I can't force her to go in the same potty and she can hold her need longer than I can. Others I'll admit are awfully convenient. She likes to clean the baseboards in the kitchen and will often beg me for a Lysol wipe to do so. I cannot pull out a wipe without her asking for one to clean something with.

I can actually tell how the day is going to go for the nerdlet in the morning by how much her compulsive tendencies show when she first gets up. The first thing she does on most mornings is collect all her ponies in a backpack to bring downstairs. She will also bring Mango, her flamingo. She always brings Mango and most mornings she will make sure she has at least her favorites of the ponies. This morning, she did not bring her ponies downstairs and I was sure that I was wrong about my theory because when I started listing the days activities, I got a lot of yelling 'no' and even an 'I need a break.'. Today, however, went extremely well despite the fact that we had a new therapist come to the house and a few activities out of the house. She actually did amazingly well and had her best Kindermusik day yet. On the one hand, my nerdlet's idiosyncrasies can be quite hard to deal with some days (especially if I'm having a bad day of my own), but on the other, I am glad that she gives me her own warning of the day that she is going to give me.

I sure do love this little girl and I hope that I don't end up turning her into a little version of the character Monk.
Posted by Kimberly at 1:09 PM No comments:

'Terima kasih' is the Indonesian word for 'Thank you'. I have a good friend that I met in January of 1992 that taught me this and a few other words and phrases (only the polite forms, even for 'drop dead'). She is the nerdlet's godmother and one of a few friends that I have that I have been close to for almost two decades. I'm so grateful for her and the other long-term wonderful friends that I have in my life. I have also been lucky recently to have come back into contact with friends I knew from over two decades ago. I'm not someone that makes friends easily or that needs a lot of friends in my life, but the friends that I do have I cherish and I really cherish the quality of our friendships. Thanksgiving is and almost always has been my favorite holidays for a number of reasons and in the spirit of the upcoming event, I'm going to try to be more aware of specific things I'm appreciative of and not just the gratitude for how blessed I am in what I have in general.

October is Down Syndrome Awareness Month & Breast Cancer Awareness Month. The chances of a person with Down syndrome having breast cancer is up to 25 times less than the general population. The chances of a person that has been pregnant with a child that has Ds is up to 25 times greater. So it is especially important for mothers to get regular breast exams and mammograms!

A lot of people that I know are participating in 31 for 21, which is where they are blogging everyday in October about Down syndrome to bring awareness. I look forward to their posts, but I've decided that it's really not for me. I do plan on sharing a bit about Ds and also breast cancer as both causes are dear to my heart - Ds because of my beautiful, perfect bear cub and breast cancer because my mom is a breast cancer survivor and also because there have been a few in my life that have passed away from breast cancer.
Posted by Kimberly at 6:22 AM No comments: