My last completed project of 2014 was a crocheted dragon scarf that I finished earlier today for the nerdlet.  I found the pattern earlier this week. I changed the pattern a bit, but the overall look is mostly the same.  I also went with one horn instead of two based on the nerdlets preference.  I actually was considering making one in red, too, but after having made one, I have decided that a second one really doesn't need to be made, though I might change my mind as the bear cub has shown some affection for this one. 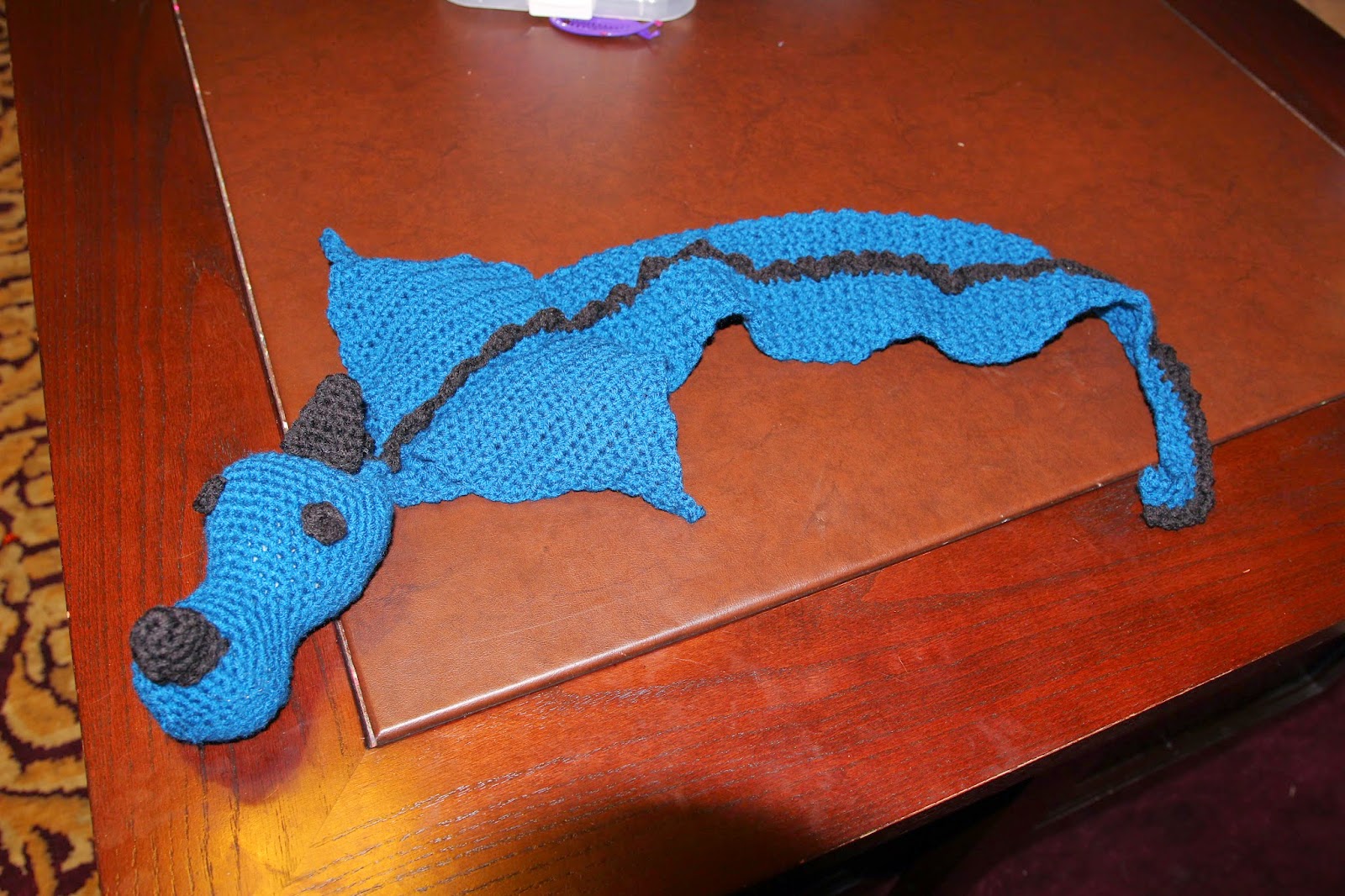 Besides the spike, I changed the shape of the head very slightly, the way that the spikes were done down the back and the wings are completely different.  I made one of the wings the same way as the pattern, but really didn't like the shape so I undid it and winged the wings.  I also went with crocheted eyes instead of pre-made eyes.  This second color is more accurate.  The color is called peacock. 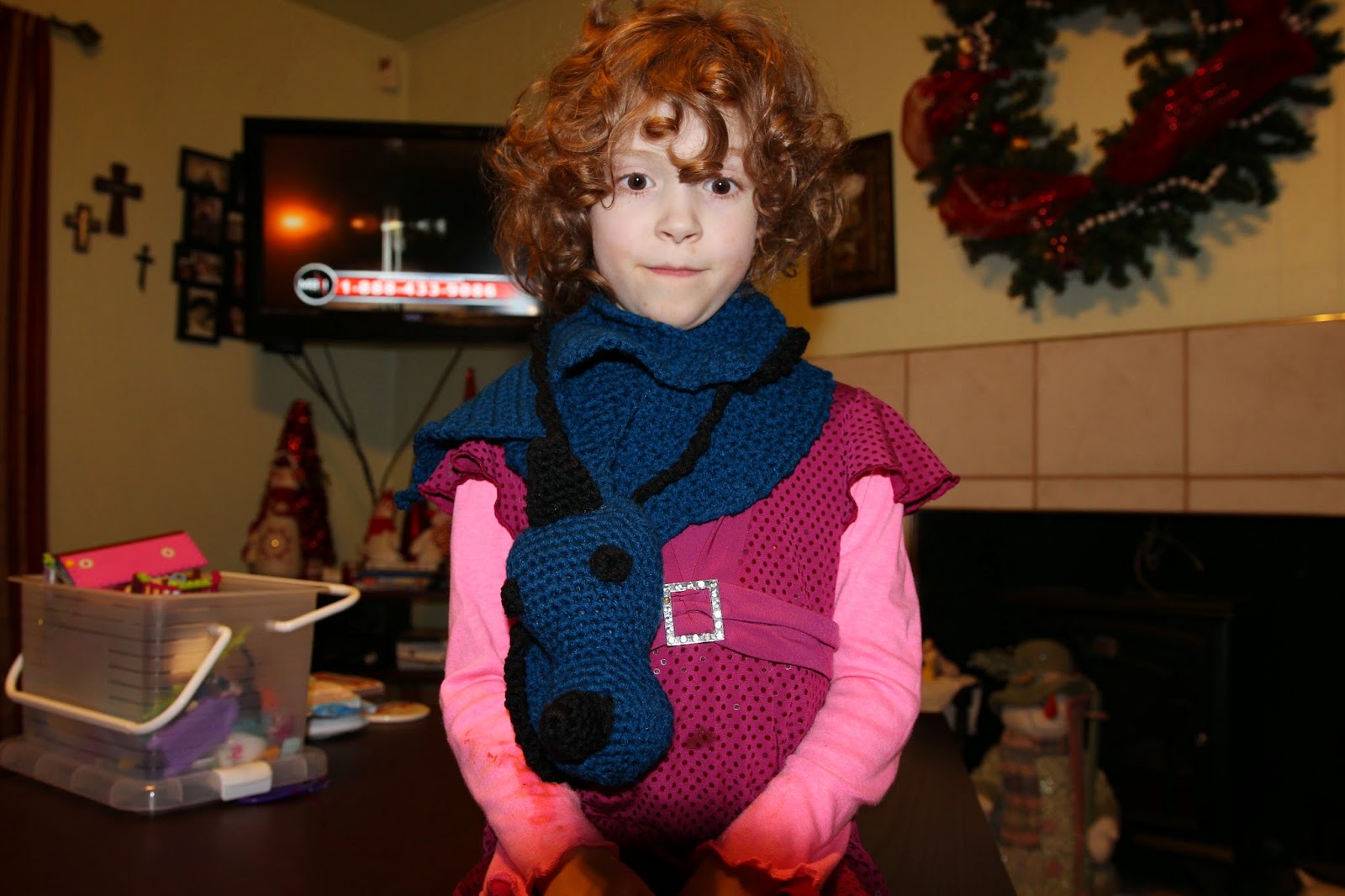 I finished the other three versions.  I really liked how they came out and can hardly wait until the girls wear them, though I am going to wait until school starts back up. 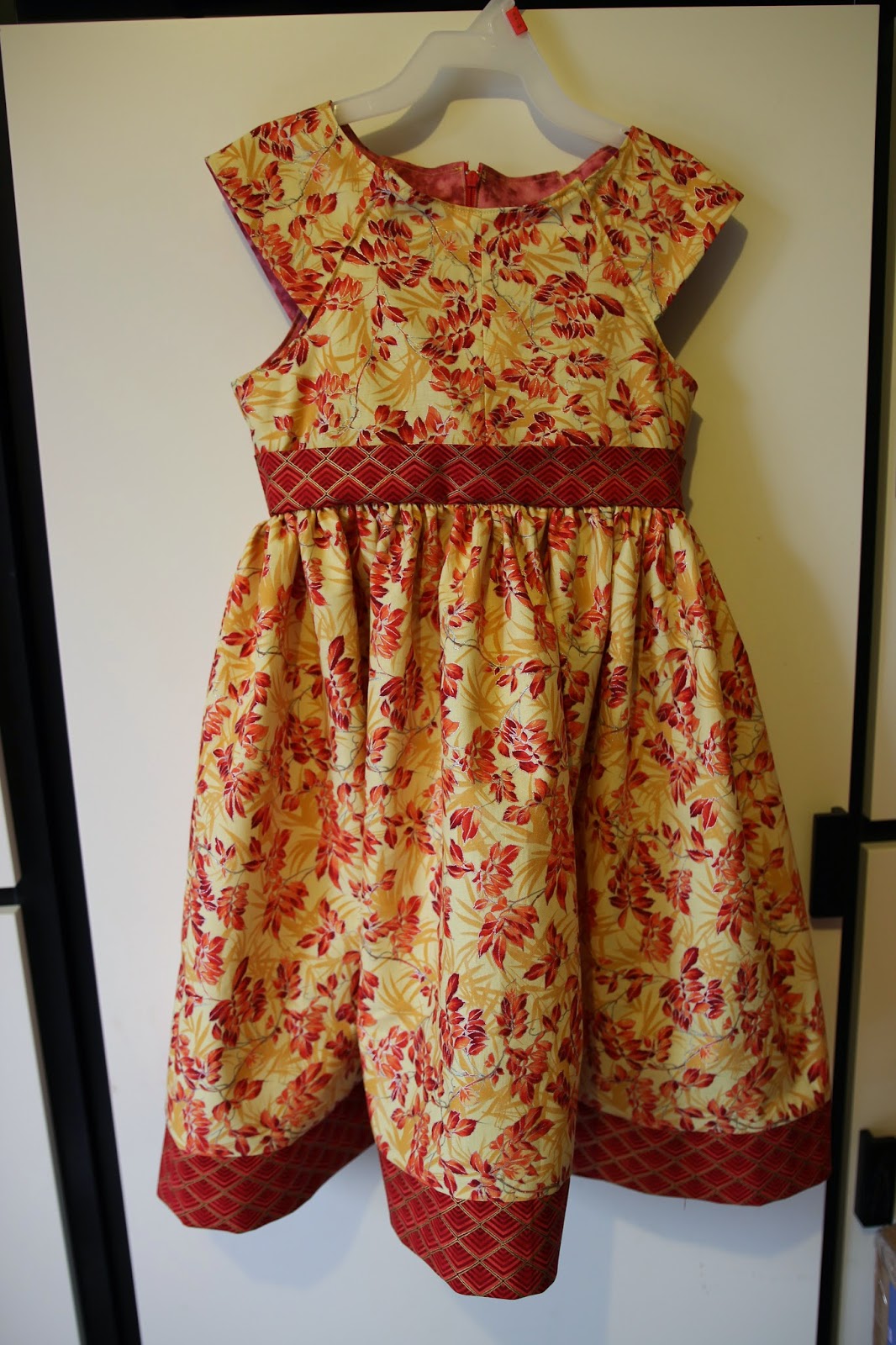 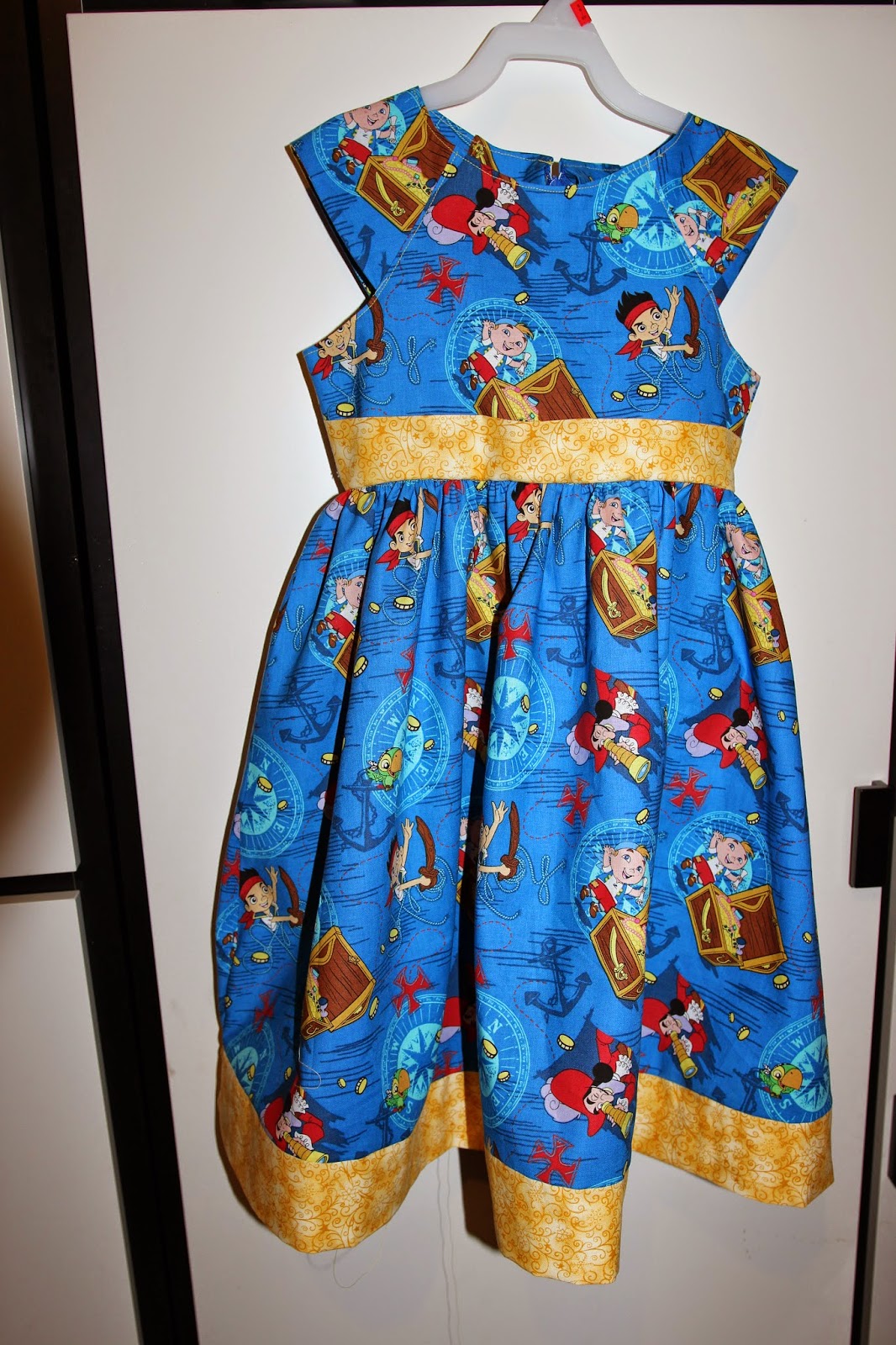 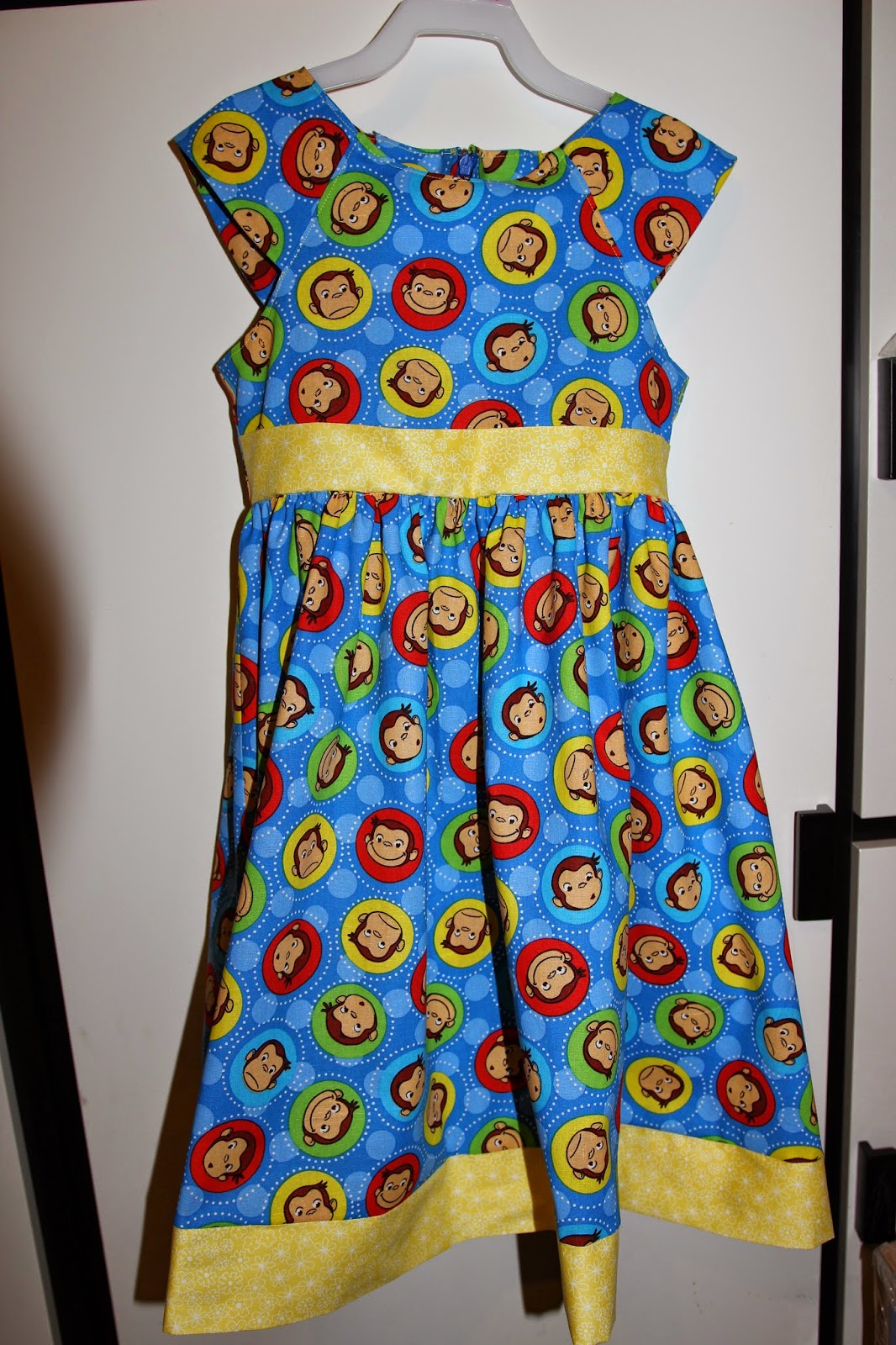 Now, I need to decide which of my stack of UFOs is next.
Posted by Kimberly at 4:33 PM 2 comments:

I thought before I revealed the first finished dress of the sewcation that I would share so more reversible bags that I'm giving to the teachers for Christmas.  They already know what they are getting and when.  I had ARD meetings for both the nerdlet and the bear cub the last week of school and I took a stack of fabrics for them to choose from for their own bags.  These are not all the bags that I made, but I have already given away a handful.  The five on the right are the ones for the teachers and speech language pathologist. 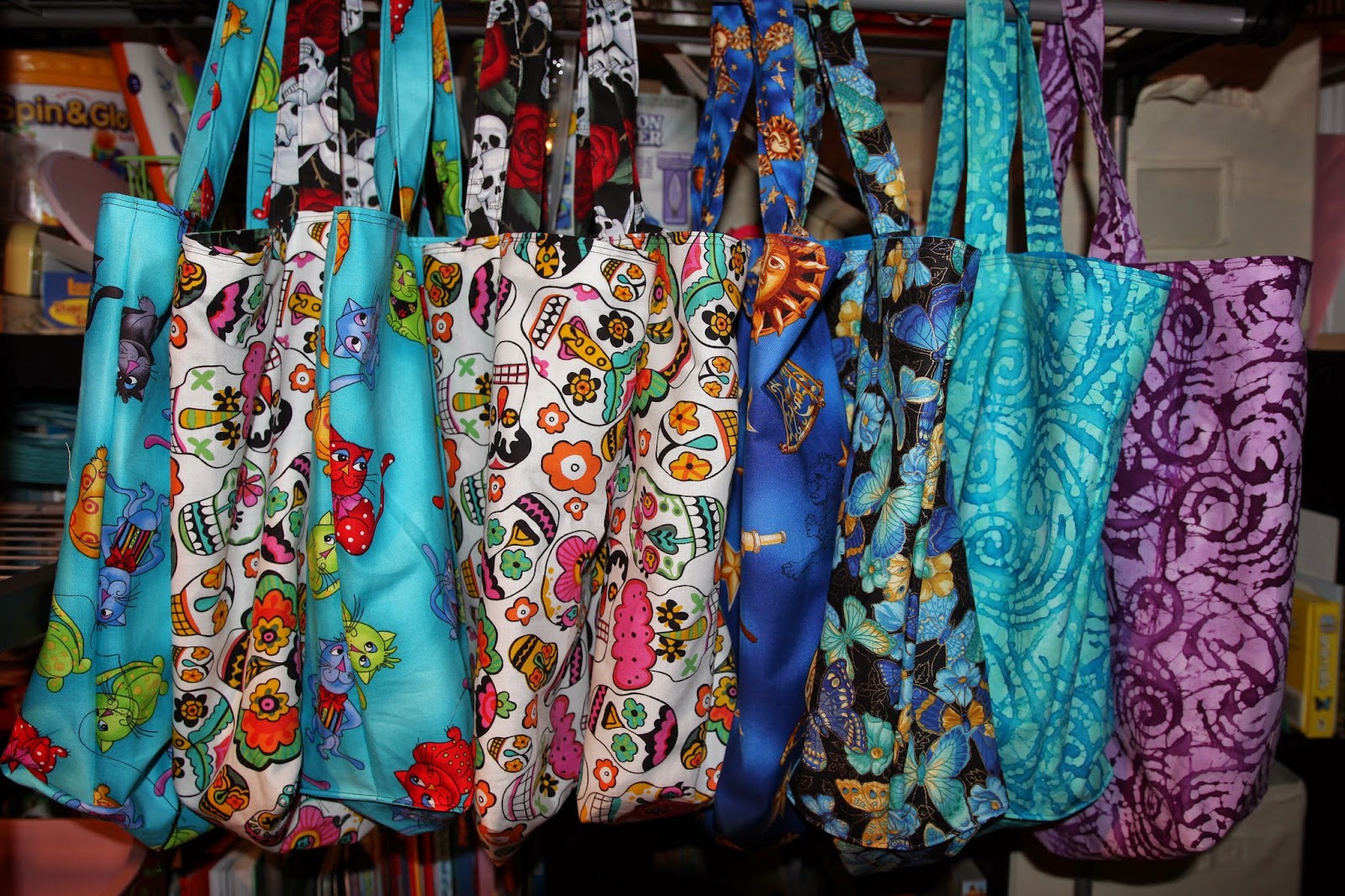 Here is the finished dress, McCall's 6875 version 8.  This was supposed to be the bear cub's first day of Kindergarten dress dress.  It is a size 4 dress and is the smallest of the four.  It makes me kind of sad that I'm probably not going to be making size 4s anymore. The two fabrics that I bought are so gorgeous.  I bought them from the sale area at the local quilt store.  I always go through the sale fabrics, and while I often buy from them, I hardly ever find quality fabrics like these two.  I had a hard time even believing they were there.  Here is a close up because you can't really see the beauty in the large picture of the dress. 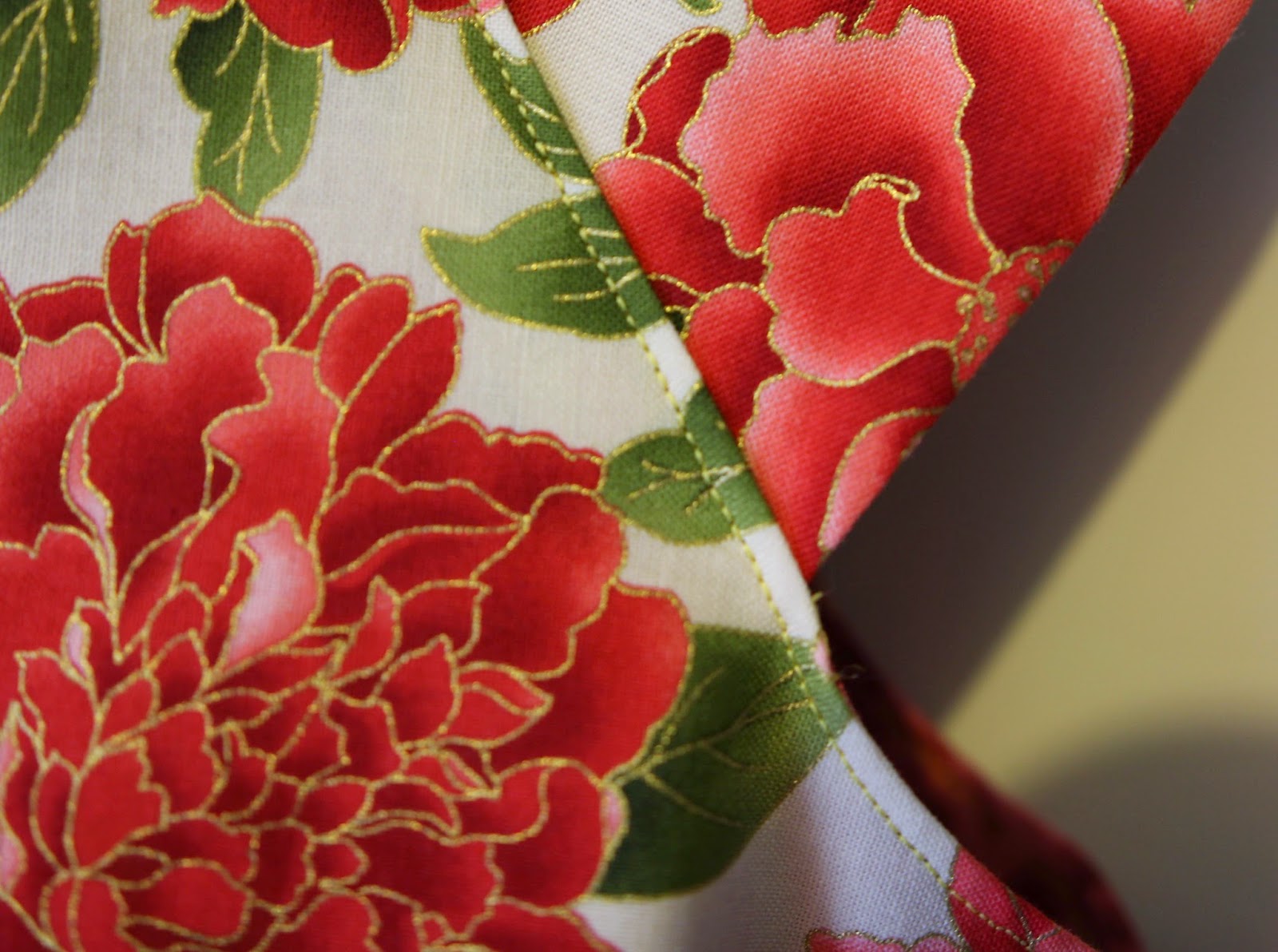 Anyway, I'm back to sewing now as I have three left to finish.

And if anyone cares, here are the links to the other bags I have made and the tutorial and the other versions of this dress.
Bag tutorial
Other bags 1, 2, 3
Versions 1 and 2
Versions 3 and 4
Versions 5 and 6
Version 7

Last Sewcation of the the Year

Q took the girls to visit my mom this morning so that I could get a sewcation.  Today I have been working on the girls first day of school dresses (yes, I may have missed it by a few days) which will now be first day of 2015 dresses or something.

The top two are the bodices for the first day of school dresses.  The bottom two are fabrics that Darth Monkey and the bear cub picked out recently.  The pattern is McCall's 6875, which is a favorite to see on the girls.  For these, I am leaving off the straps because both the nerdlet and the bear cub have taken to chewing on their straps constantly.

I should have them all finished tomorrow.  I'll try to remember to post pictures.
Posted by Kimberly at 7:43 PM 4 comments: